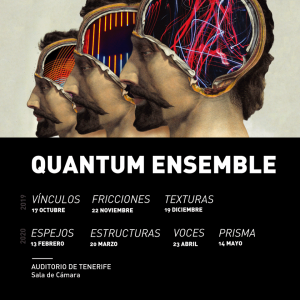 The new season of Quantum Ensemble, a group resident in the Tenerife Auditorium, will be as follows:

The Quantum Ensemble presents in this programme three figures who, coming together in the Vienna of the end of the 19th- and beginning of the 20th-century, showcase wonderfully the creative exuberance that took place in that city at that time. The concert presents Transfigured Night, one of Schoenberg’s most popular works, in addition to two other compositions of great interest: the Trio for Clarinet, Cello and Piano by Alexander Zemlinsky and The Heavenly Life, a song for soprano and orchestra by Gustav Mahler that dates from the time of Mahler’s composition of the song cycle The Boy’s Magic Horn, but that ultimately became the fourth movement of his Symphony No 4. It is particularly noteworthy that, in their continued effort to expand their chamber repertoire, the Quantum Ensemble is performing two of these three compositions as arrangements that require only three musicians, therefore providing a different instrumental perspective and allowing a contrasting, and at the same time interesting, aural experience.

This concert, following a well-established tradition in the programmes of the Quantum Ensemble, allows us to contrast the styles and creative personalities of two pairs of composers whose biographies overlap in space and time. Regarding the first pair, we will enjoy a marvellous, profound work by Benjamin Britten, namely, his String Quartet No 3. The contrast here is established with his compatriot, the English composer Harrison Birtwistle, who belongs to a later generation that broke in a radical fashion with the past. Birtwistle creates with Linoia very singular work for clarinet, piano and dancer. The differences are no less pronounced in the case of the two American composers whose pieces we will listen to in the second half of the concert. In spite of their being contemporaries and the premieres of their works close in time, John Cage and Aaron Copland belong to two very distant aesthetic universes. What is shown by the pairing of these four compositions, similar as regards to nationality and time-frame, but provoking very different aesthetic experiences, is that audience members should cultivate an attitude of flexibility and curiosity—one devoid of preconceptions—when attending concerts that showcase the amazing wealth of 20th century music.

The obvious protagonist of today’s concert is the piano quartet, giving rise to a programme which is particularly interesting, since the presence of this formation in chamber music cycles is not nearly so frequent as the much more popular string quartet. Nevertheless, there is a repertoire for the piano quartet deserving of consideration, and the present concert begins and ends with two paradigmatic examples: the Piano Quartet No 1 by George Enescu and, closing the concert, the Piano Quartet No 1 by Gabriel Fauré, who had been the teacher of composition of Enescu at the Paris Conservatoire. Although the temporal and geographical distance between Fauré and Enescu is quite considerable as far as the year and place of birth are concerned―Fauré was born in France in 1845 and Enescu, in Romania in 1888―their biographies intersect in Paris at the end of the 19th century. Here Fauré achieved an increasing degree of influence over the next generation of composers, who were finding their own paths in the French capital. His influence was due not only to the importance of his compositions, but also to his teaching and subsequent administrative roles, since, as director of the Paris Conservatoire, his commitment to new music was of crucial importance for the development of this new generation. Between these two works of great variety and substance, the Quantum Ensemble has commissioned Pablo Díaz to arrange for violin, clarinet, viola, cello and piano four hands, one of the most popular compositions of the French repertoire, namely, Paul Dukas’ The Sorcerer’s Apprentice.

This concert presents three works of music which are seldom included in today’s programmes. Furthermore, these are pieces that show different kinds of affinities and contrasts among themselves and, in this way, create a tapestry of connections and dissimilarities that makes today’s concert very interesting. So, the temporal distance that separates Wolfgang Amadeus Mozart from Francis Poulenc and Bohuslav Martinů seems shortened by the adherence of these last two composers to the postulates of neoclassicism in a very important part of their compositions and the unavoidable influence which Mozart exercised over those following this trend. Moreover, whereas Mozart’s and Martinů’s works display the composers in their full maturity as they develop works of great depth and ambition, Poulenc’s piece is a composition of modest dimensions that was composed when the French composer was not yet twenty years old. Finally, the concert begins with a work by Mozart for a string trio, continues with Poulenc’s duo for two clarinets and ends with a composition by Martinů that requires both of the two previous formations, thus creating a very unusual ensemble. This will no doubt intrigue people, which is what the Quantum Ensemble usually endeavours to do: how will Martinů manage to conjoin the dual presence of the clarinet sound, so versatile and potentially powerful, with the three instruments traditionally associated with the string trio?

This concert represents a kind of microcosm of the programmatic principles that articulate the seasons of the Quantum Ensemble. Three works, covering three centuries, showcase the temporal and stylistic ambitions of the repertoire of the ensemble from Tenerife. The commitment to new creations, a key aspect of the artistic motivation of the Quantum Ensemble, is evident in a premiere by Gustavo Trujillo. To the temporal diversity, we can add the flexibility of the different formations required for this concert, which go from the single cello soloist in Bach’s Suite for Cello No 6, through Brahm’s Trio for Violin, Cello and Piano No 1, and on to the sui generisformation of the work that will be premiered today, which is composed for violin, clarinet, cello and piano. However, apart from such variety and contrast, there is a common thread that connects the pieces played in this concert and, in this way, confers a certain cohesiveness to it: the history of music allocates a privileged position to both Bach and Brahms, as far as it is concerned with their capacity for composing works in which creativity is joined to great structural rigour; from very different stylistic premises, as it couldn’t otherwise be, Trujillo’s new composition is part of this same tradition of great formal and structural sophistication.

This programme contrasts some of the wonderful pieces that Gioacchino Rossini created in the last decade of his life with two works by two of the greatest twentieth-century Italian composers: Luigi Nono and Salvatore Sciarrino. Having recovered from the twenty-five year creative dry spell that followed the premiere of William Tell, and released from his professional burdens and artistic expectations, Rossini devoted himself to the creation of compositions that he would share with the guests attending the Parisian musical soirées that he offered weekly on Saturday. Today’s concert will allow us to enjoy a varied and entertaining sample of these works, which brilliantly showcase the great skill and creative versatility of Rossini, whose advance in years didn’t keep him from displaying a free and adventurous spirit, nor from evoking humour, tenderness and passion in compositions of great subtlety. In contrast to these works of Rossini’s, the Quantum Ensemble introduces in its repertoire two works for a single soloist, one for clarinet, the other for piano, created, respectively, by Sciarrino and Nono. We find ourselves in an aesthetic universe that demands from both interpreters and the audience maximum concentration: there is nothing routine or predictable in works in which every sound, every phrase and every articulation is part of a profoundly introverted sound reality, a reality that follows no other direction than that established by the music itself.

This programme presents a new collaboration of the Quantum Ensemble with another established group, the Camerata Lacunensis. And, as usual, the concert offers a really remarkable variety of formats, given how unusual and complex the groups of performers required are: from the eleven clarinets needed to interpret Steven Reich’s New York Counterpoint, through the mixed choir, with and without piano, for Samuel Barber’s pieces, to the commitment to the 20th-century avant-garde, represented very effectively in the work by George Crumb for two pianos and two percussionists. The three American composers whose works will be performed in this concert provide us with an excellent measure of the wealth and contrast of styles that their country has produced throughout the 20th-century. The composition by Crumb, the third of the four books that make up his ambitious Makrokosmos,is a wonderful addition to the repertoire of the Quantum Ensemble, since it will allow the public of Tenerife the marvellous and rare opportunity of enjoying a sonic universe both surprising and extremely satisfying.

back to News & Press